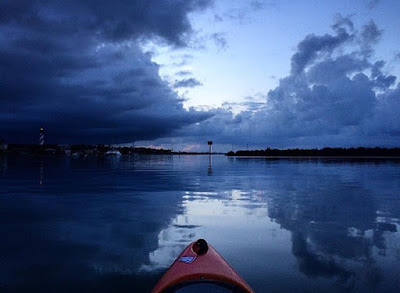 The old boat launch was empty. Abandoned, practically. Mildewed picnic tables and a sanded-over concrete boat ramp showed obvious signs of neglect. Not unwarranted neglect, mind you. Yellow caution tape haphazardly strewn between two posts served as a warning to keep visitors off of the dock beyond. With large sections missing, posts leaning, and splintered slats half peeled away, the wooden structure had obviously seen better days.

But the coffee black waters of the Saint Johns felt good, and the short swim to the only intact section of dock proved relaxing after a hot summer day in the sun. With and no ladder for help, it took some effort to climb onto the broken dock from below. Effort well rewarded, however, as the view of the massive river opened up to the north. The company of a close friend alongside was more than welcomed, and a relatively cool, slightly sweating beer still tasted good on a muggy evening.

One of the many nice things about having close friends is the ability to just enjoy each other's company. Sure there's plenty to be said, but there's a time and place. Often simply sitting in relative silence is just as enjoyable as deep conversation. And so the evening was spent less in conversation, and more in staring out across the calm waters while slowly sipping lukewarm beer.

It wasn't really the water that was being stared at, however. It wasn't a pretty sunset, or passing boats. Nor was it even an attempt to soak up the final few hours of sunshine. The sunshine was long gone.

In the distance to the North slowly moved a massive storm. Your typical Floridian summer afternoon storm, but are they ever really typical? Though they're practically a daily guarantee, each remains different than the next. Every day, around mid morning, you can watch as a tiny puff ball of a cloud begins to build as it lazily moves across the sky. By lunchtime the puff ball has become an actual rain shower, and by the afternoon, a full fledged thunderstorm.

This storm was no different. In fact, it hadn't been long since it had moved over this abandoned boat launch. Gone was the sweltering sunshine. Gone was the gentle lapping of waves against the shore from a hot summer breeze. Gone was the quiet clanking of the nearby sailboats' rigging as they slowly rocked in the water. And gone was the deafening buzz of cicadas in the trees.

Instead the waters ahead lay mirror flat as the still, humid air slowly settled in now that the breeze was gone. From the dark woods on shore came a gentle white noise from thousands of raindrops as they fell from the Spanish moss draped Live Oaks, signaling that the storm had passed through. And in the distance came the occasional flash of lightning, reflected off the river, followed by a low, trembling report. The storm rumbled steadily away to the north like a giant, dark purple/blue wall, with occasional lightning flashes from within outlining its growing, irregular shape. To the West, the sun was blotted out by the anvil-like shear which cast a shadow on the old boat launch. And to the South, other afternoon storms shined brightly as their white and orange shapes quietly approached in the evening daylight.

And so the evening was spent sitting on that broken dock, watching a storm slowly roll away. Ironically, the entire reason this dock sat half destroyed and abandoned was because of a storm. And it's strange to think something so powerful and violent can set a scene so peaceful and calm as the one this particular evening.

What is it about a storm? 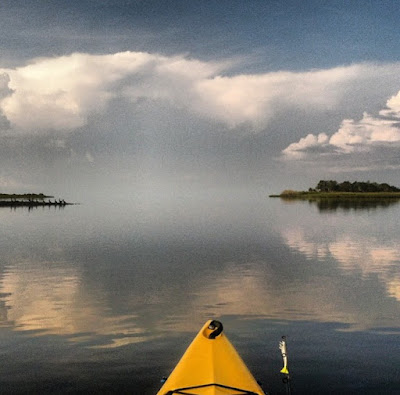 Much like staring into a fire, there's no accurate way to explain what it's like to watch a thunderstorm. No words can describe the slight flutter of nervous excitement as the all-too-familiar buzz of the emergency broadcast system blares through the radio mid-song, or flashes across the bottom of the TV screen. Nor can they describe the startled flinch that's received when a lighting strike comes a little too close. Or that feeling when a strong, cold gust of wind pierces through the humid air of a summer afternoon, signaling the approaching weather.

Storms are something terrible to be in, yet a joy to watch from a distance. There's no controlling them, and perhaps its their raw power and fury that makes them awe inspiring. 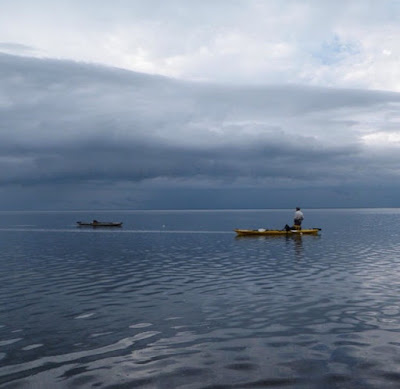 One thing's for sure; there are few things in this world as humbling yet exciting as a summer storm.

They're terrifying, beautiful, violent, and calm. All at the same time.