"But something caught my eye. A small white dot that wasn’t there earlier was moving toward us. It continued to get closer and I soon realized what it was.

This is just a snippet of a short story I recently wrote for Legendary Whitetails. The whole article can be found here: http://community.deergear.com/Article/DartingDeer

If you're an avid hunter like me, be sure to head over there and check out their pages/merchandise. It's definitely worth a look!

If you've noticed that my writing has slowed a little bit, it's because I'm in the process of planning some pretty big things. The whole "figuring out my career" thing also takes a bit of my time up. But stay tuned! Big things on the way.
Posted by Alex at 2:31 PM No comments:


There’s something refreshing about running offshore to fish. Maybe it’s the change of scenery, species, or even the tackle. But it’s something that I love to do.

Unfortunately, I’m poor. Most of my fishing consists of inshore fishing not because it’s ALL I like to do, or I’m some inshore purist. Alas, it’s merely because running offshore is so freaking expensive and I can't afford it all the time. Gas, chum, bait, etc. It all adds up and before you know it, you’ve had to take out a loan with the bank to cover your fishing trip.

It’d been well over a year since I had a chance to venture offshore. And it –just- so happened that during the week I ran home to visit family, the Red Snapper season had been re-opened. After getting hold of my brother, I convinced him that taking his boat offshore would be an awesome brotherly thing to do, and before I knew it, we were on our way out of Pensacola pass in route to slay the snapper. 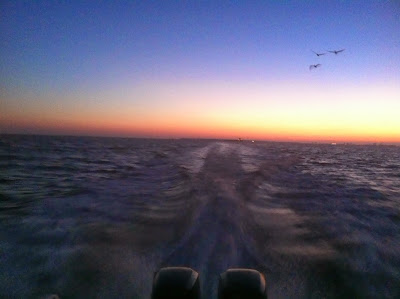 Our first stop was to pick up some live bait. It was here that we discovered the live well wasn’t working. Rather than simply not have any live bait, we opted to fill the live well the old fashioned way and I quickly found myself leaning over the gunnel with a five gallon bucket to fill the well.
After a short trip out to the wreck, we anchored up surprisingly well (it never goes smoothly) and started fishing. This is where I often note the subtle differences between offshore fishing and other types of fishing. Rather than throwing out an elaborately designed fly, or an artificial that perfectly mimics a small shrimp, I was looking down at an entire cigar minnow which was hooked brutally through the eyes. There was a giant bag of chum hanging off the back of the boat, and with the rough seas, every step was more of a controlled stagger. These are things you miss while wade fishing inshore, or trout fishing in a stream.

It only took a few seconds after my first drop to feel a bump. I quickly reeled up, and was immediately doubled back over. Pinned to the gunnel, I watched as my line slipped away almost instantly, and before I knew it “Snap”. I was cut off on the wreck. There was nothing I could have done to stop the fish. I checked my reel and confirmed that I absolutely could not tighten my drag any tighter, and upon reeling up what was left of my rig, I noted that my 80# leader had been easily broken off. Whatever was down there was big.

After rerigging, I dropped back down and it wasn’t long before we started putting fish in the boat. With the limit being only two red snapper per person, it took no time for my brother and I to limit out. 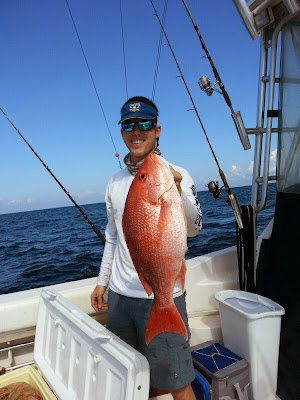 In addition to four Reds, my brother also caught a Mingo and a Black snapper. At one point, I felt a small nibble and reeled up my rig to discover I had a small ruby red lips on my line. But rather than unhooking him and tossing him back into the drink, I opted to lower him on my line about half way to the bottom. And sure enough, it took only a minute before my rod was doubled over, and the fight was on. 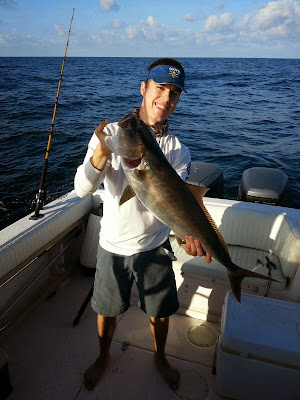 Behold the world’s luckiest Amberjack. Measuring in at 29.5 inches, he was exactly one half inch too short to keep. Reluctantly, I had to throw him back, and in the course of only a few seconds, watched this fish transform from the luckiest to the unluckiest fish in the world. There was a sudden flash, a cloud of red, and then half of an Amberjack floated up to the surface. Barracuda at their finest. It’s actually infuriating to see this. Rather than us get to keep the Amberjack, I let it go (to live) only to watch it get fed to a barracuda.

With our Red Snapper limit reached, we decided it was time to see what we could get in the chum slick behind the boat. We began cutting up small pieces of frozen bait, and in combination with shaking the chum back, it wasn’t long before we were seeing fish under the boat. They –looked- like big Red and Black snapper. The problem was that we couldn’t catch them. Using a small hook and fluorocarbon leader, we fly-lined small pieces of bait into the chum line, watched the fish pick it up, and then proceed to never stop them. Straight down to the wreck, drag screaming, the fish just couldn’t be stopped before cutting us off on the wreck below. This happened several times, even with the heavy tackle we were using. It was almost like our drag just didn’t exist.

Unfortunately, we were unable to solve the mystery as to what was kicking our butts behind the boat. A look at the clock told us it was time to go as my brother had a work meeting that he needed to get back to. Just before cranking the motors, however, he happened to look down in the water and see some monofilament floating near the props. We climbed over the gunnels and began pulling on it to discover it was completely wrapped around the port motor’s prop.
Great.

Taking everything even remotely valuable off of my body, we raised the motors and I climbed out onto the foot of one and began unwrapping line. It wasn’t our line, just someone’s that had been left floating around near the wreck. After quite a bit of unwrapping, I discovered that it wasn’t just mono. It had wire leader attached to it as well. I was sure I was never going to get it all unwrapped, but as I sat there on the starboard motor’s foot, leaned over in 4 foot swells while trying to cut away mono from the adjacent prop, I noticed it started coming loose. To both mine and my brother’s shock, it suddenly all came right out. Disaster averted. Getting back INTO the boat proved to be much more difficult than getting out of the boat, but I somehow managed to do it without killing myself. And after a minor issue that involved us losing the anchor, we left the wreck on our way back to dock with a cooler full of fish. 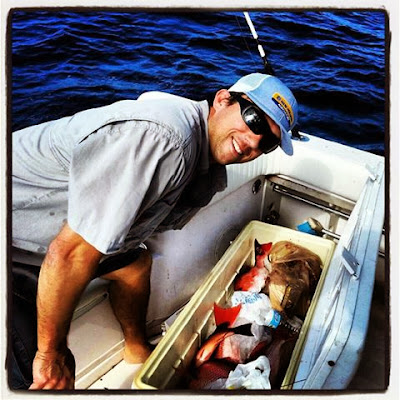 Overall the trip was awesome. I very rarely get to run offshore so I was overly thankful that I had the opportunity to do so. I really do enjoy everything about it. Big fish, big bait, big tackle, big boats, big water. It’s a unique way of fishing and something I wish I could do more of. Hopefully I can make it out again soon. And maybe next time we can stop those fish.
Posted by Alex at 11:30 AM 2 comments: