The bright yellow topwater lure slowly but surely made its way back to the boat, each 'chug' sending ripples of water outward in the mirror flat water. The sun had just broken over the horizon and its early morning tendrils shone through the nearby pines on the shoreline to dance on the bay. 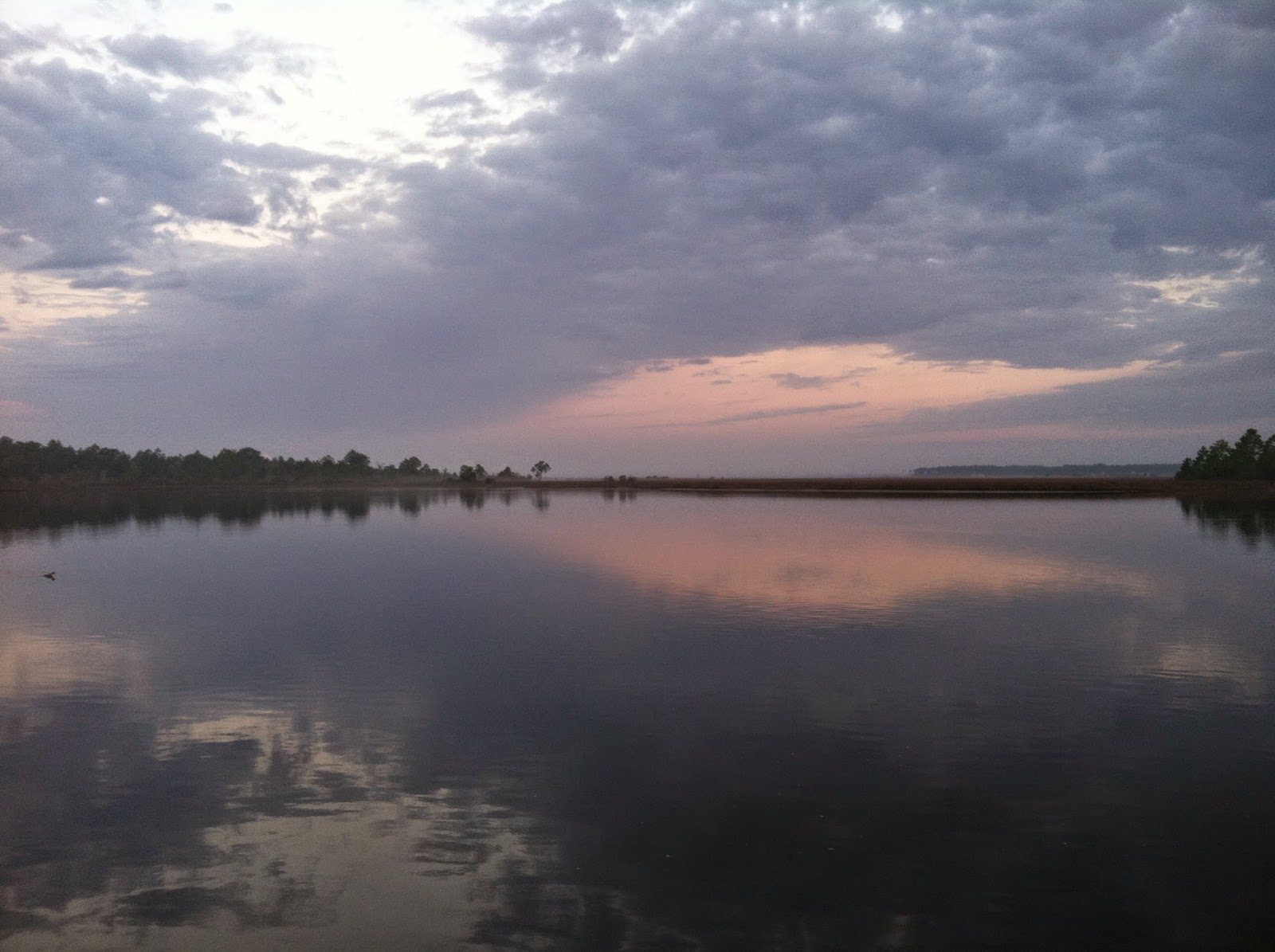 The wind had yet to come up, so the only sounds to be heard was the quiet whirring of the trolling motor and the rhythmic 'chug' of my lure. But that rhythmic chug was abruptly broken.

A splash, followed by the tug on the line and the screaming of the drag ripped apart the early morning calm. The fight was on.

But what I didn't know was what was on the end of my line. Surely not some trout, I thought as the fish continued to take line. I was fishing too deep honestly. What in the world was it? A small jack crevalle? A red?

After a few minutes of fighting I got my first glimpse of silver under the pale green waters of St. Joe bay. It was a Spanish Mackerel. And a big one at that. The picture doesn't do it justice, and please excuse the hair... 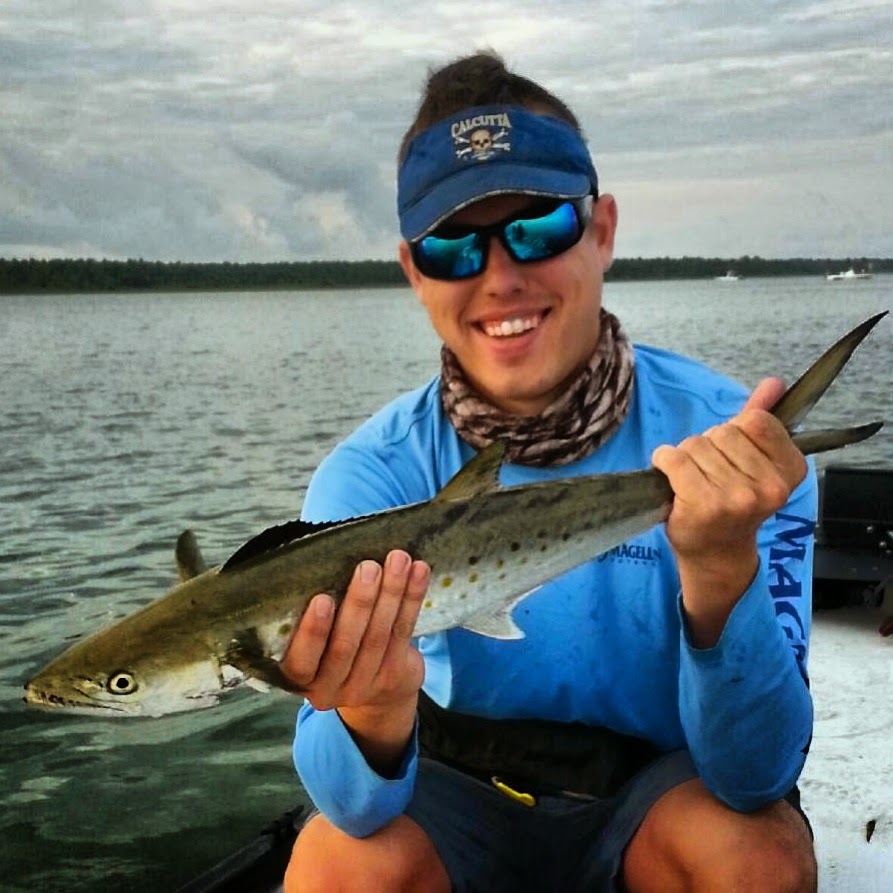 I generally don't view Spanish as noteworthy unless I'm writing about a fish fry, but this one was a big one. I never measured it, nor weighed it. But there was a brief discussion with my dad as to whether or not I had a small King.

With a quick tail grab, the hefty fish was in the boat, and thrown on ice. I wanted desperately to fill the cooler with these guys, so as soon as my lure was free, it was back out there, chugging away.

And once again, on my next cast, it only took a few chugs before another monster Spanish attacked the lure. This time the fish went skyward, shaking his toothy head and ripping line back off the reel. But unfortunately, as quickly as the fight started, it ended. That all too familiar "blip" when your heart sinks and you know you've been cut off. I reeled up a lureless line and said goodbye to a favorite lure of mine. Luckily it died doing its job and wasn't lost in grass or some ill-placed tree.

As my luck would have it, I didn't have another lure just like it. It was the only one of its kind I had in the tackle box. I tried tying on very similar lures, but never had the same kind of luck again. Topwater is always exciting, and I found that big Spanish on the surface are quite the thrill. Over the years I'd actually forgotten how much fun it can be to catch these toothy critters. Maybe next time I can land a few more (with a thicker leader), and make the most of a good fish fry.
Posted by Alex at 4:53 PM No comments:

Sand in the tent

“Did you hear that?” asked my dad, looking over his shoulder at the ominous dark cloud across the bay.

I had, of course, heard the thunder coming out of the massive storm. “Yeah.”, I responded, brushing some sand off my arm. “I think it's heading away from us though”. 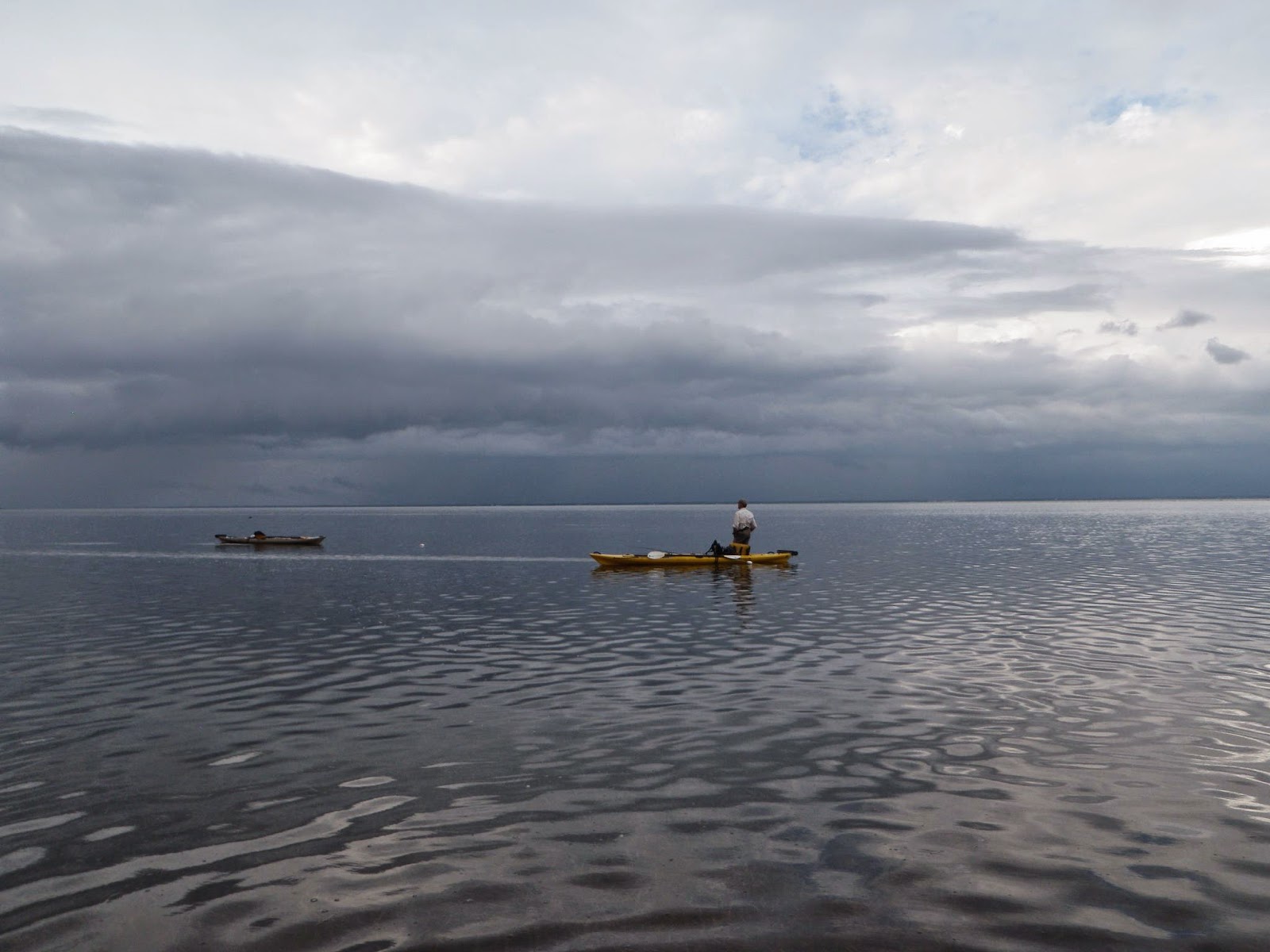 If ever there was a phrase to guarantee a direct hit from a storm of apocalyptic proportions, that's the one. It's probably what Jim Cantore says when he arrives at some poor old coastal town ahead of a hurricane.

The storm took no time to decide to jump right across the bay, and whip everything into a frenzy. Paddling our hearts out, my dad and I raced back to shore, praying that we not only made it, but wouldn't get hit by a bolt of lightning. Our campsite was a little dot on the pristine white-sand shoreline of St. Joseph State Park and in that dot was our tent, the only shelter for miles.... 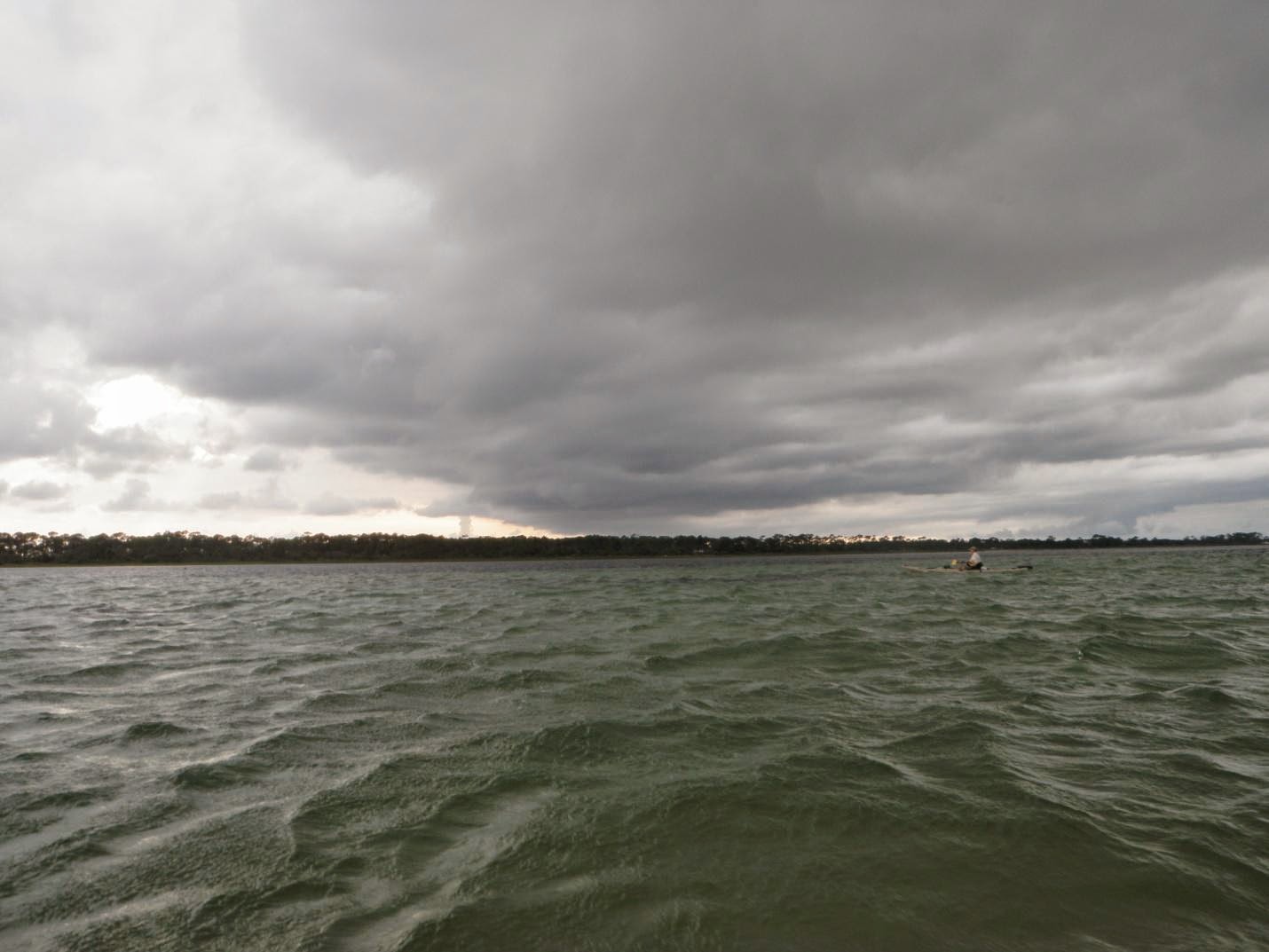 I was lucky enough growing up to get to spend many of my summers in and around Port St. Joe Florida. A hidden gem along the Gulf Coast, St. Joe and its state park provided an almost limitless playground for me in the form of camping and fishing. My dad and I would load up the canoe or kayaks and set out for week long camping and fishing trips along the bay. We'd pitch our tent right on the sandy beach next to the water and fish from there.

If you've never had the good fortune to camp on the beach, allow me to set the scene for you:

Try as you might, the sand gets onto and into everything. After about four days, it becomes a way of life. Its omnipresence is a constant reminder that even in paradise, you're forced to cope with this otherwise unseen gritty hell. There was, however, always one thing that could give you a break from the sugar white sand: Rain.

So as my dad and I paddled for our lives from the storm ,which had now whipped the bay into a frenzy, we were hit with fat heavy raindrops. I was already covered from head to toe in sand from camping for several days. So when the rain finally hit me it was almost like taking a shower. It honestly felt amazing to finally get SOME of the sand rinsed off my body.

We were close enough to shore now that I could see the trees and grasses getting whipped around in the high winds. Heavy bands of rain and wind were no longer showering us, but rather drowning us. Most of the sand on me -had- to have been washed away at this point. A crack of lighting ripped through the white-washed sky as our kayaks ground to a halt against the sandy beach. Only a few yards up onto the beach was our tent. Shelter. And inside were towels, sleeping bags, and various gear to get us dried off. I pulled the yak onto shore and looked up just in time to witness one of the strangest sights I'd ever seen.

Thanks to a massive gust of wind, our tent, with all of our supplies, was ripped from the ground and sent tumbling down the beach. I couldn't really believe my eyes. I just sort of stood there trying to mentally grasp what I was watching. The tent, with its poles sticking every directs, was hurtling itself down the coast like some massive sea urchin. To make the sight stranger, all of our gear pushed and bounced on the canvas from within, making it look like some beast was attempting to kick its way out.

By the time I gathered myself, the tent was a good 40 yards down the beach and gaining distance. I immediately broke into a sprint after our runaway shelter. I should note that no matter how many sports you play, or how many outdoor articles you read, you'll never be fully prepared to chase down and tackle your own tent. It's not exactly something you get to do every day.

I'd finally gotten within arms reach of the tumbling canvas mass and after lining up my shot to avoid the swinging poles, I dove...

Face first into the sand. I did manage to get my hands onto the tent, but the wet canvas just slipped out from underneath me. I spit a mouthful of sand out onto the ground as I picked myself up and took off after the tent again. I was angry now. Not because our gear was threatening to blow into the water and out to sea, but because less than 2 minutes after my “shower” I was sandy again. Actually, sandy isn't the right word to describe me at that point in time. Powdered donut is perhaps a more accurate term.

Perhaps I just got lucky, or maybe it was the extra grit all over my body, but my second attempt at tackling the tent proved successful. I wrestled it still and my dad caught up to help me stake it back to the ground. I opened the tent to find that our gear had been thrown around every which way, and I sat down inside to try and dry off.

Never in my life have I seen more sand in a tent than I did that afternoon. I thought about going back outside into the storm to let the rain wash some of it away, but as quickly as the storm was on us, it was gone again. Trying to become sand free would be nothing more than an effort in futility.

I just sat there, looking like a powdered donut, and stared out across the now sunlit bay. “At least the fishing's good”, muttered my dad.

Summertime in St. Joe is something I'll always be grateful for. Even through all the bugs, heat, storms, and runway tents, I enjoyed (and still enjoy) every minute I get to spend down there. Everything about the place has a special place in my heart. Even the sand... 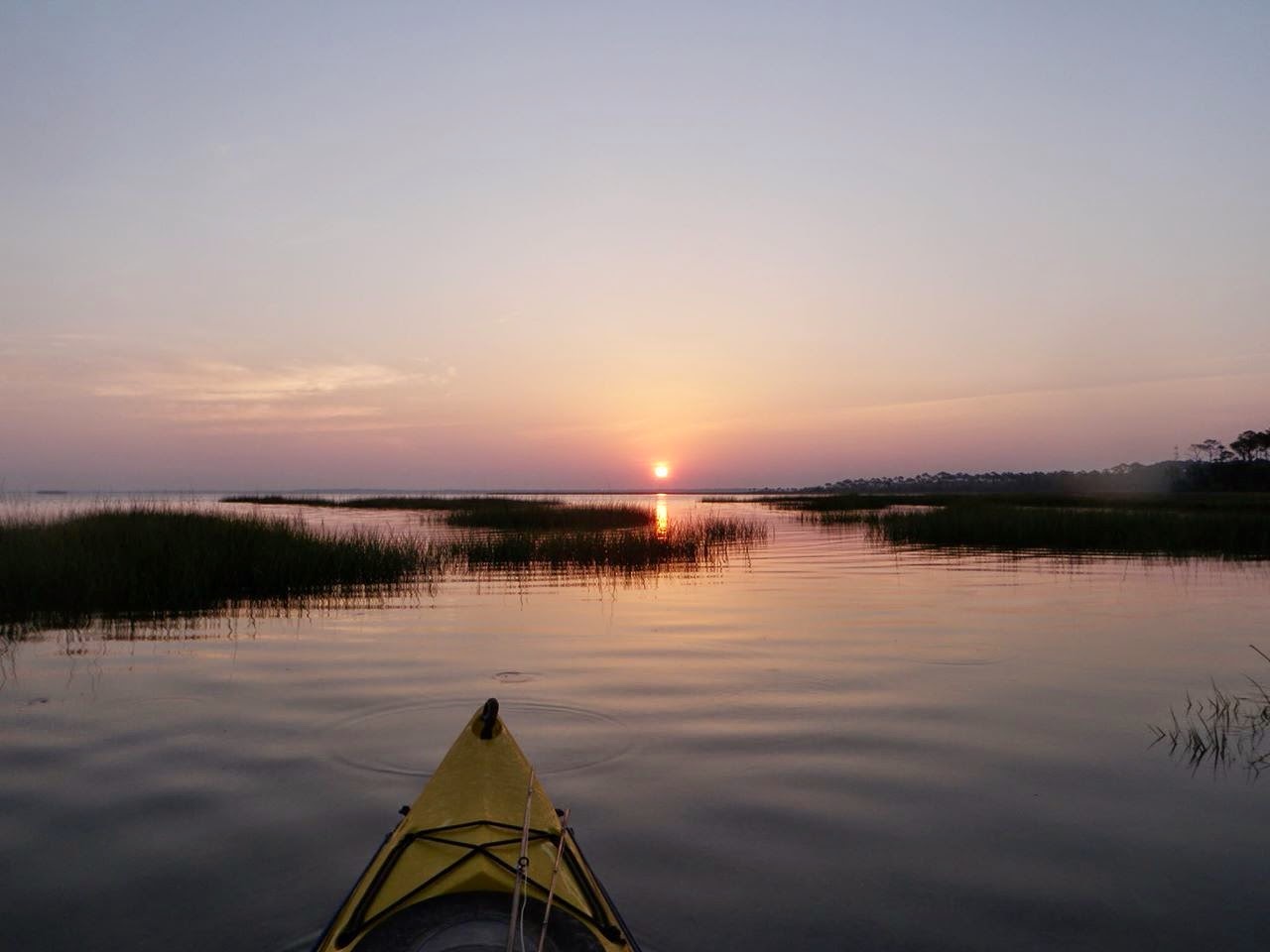 Seriously there's probably sand in my heart from that place.
Posted by Alex at 10:16 PM 1 comment: